HISTORY OF OUR CLUB 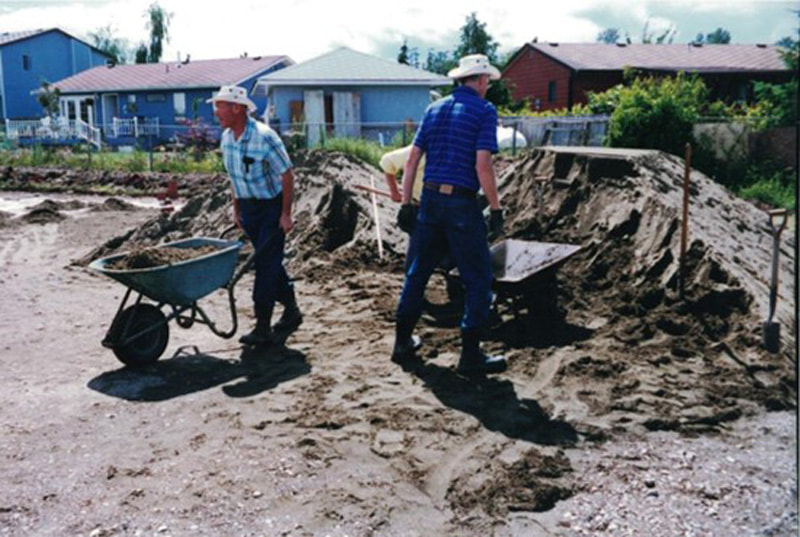 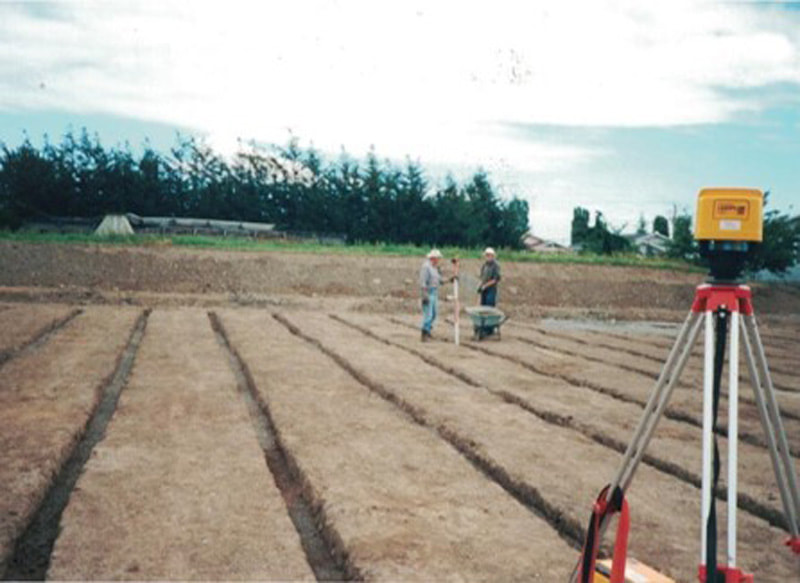 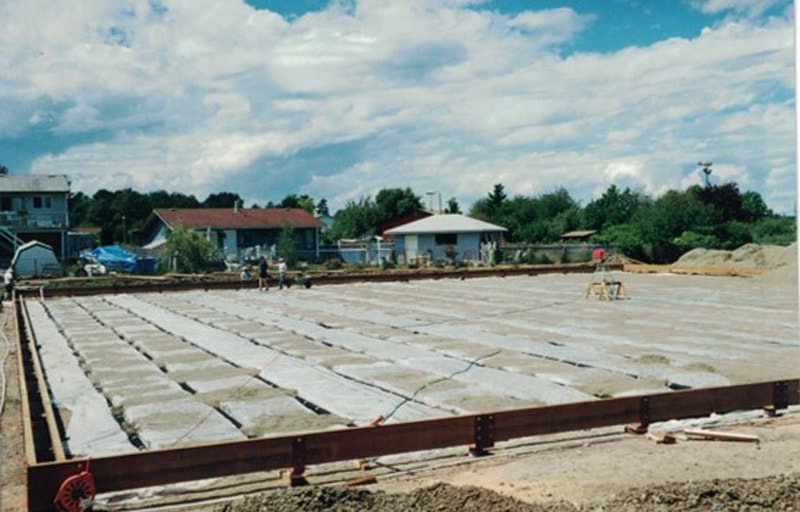 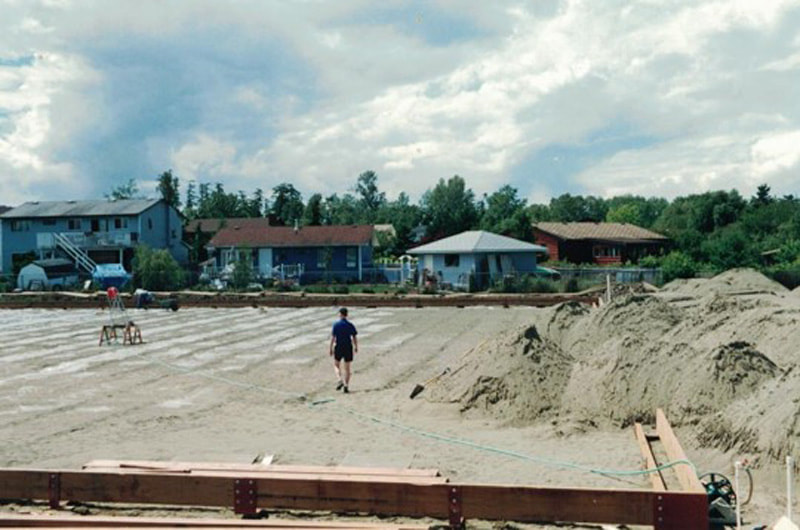 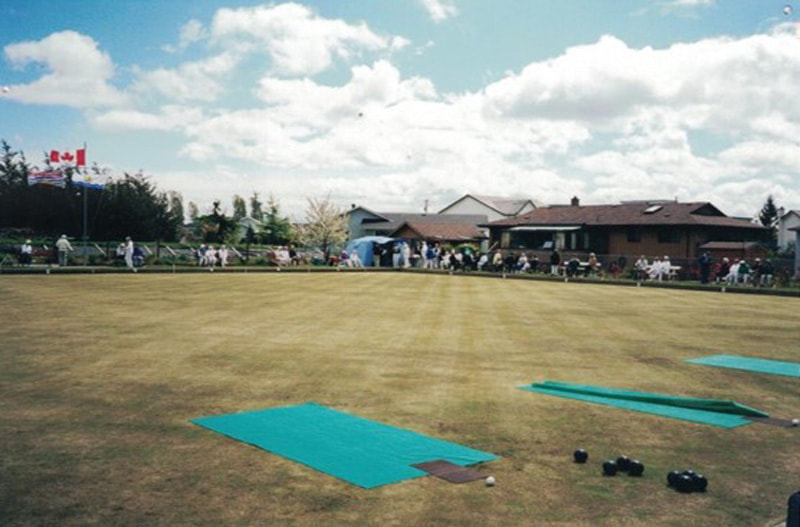 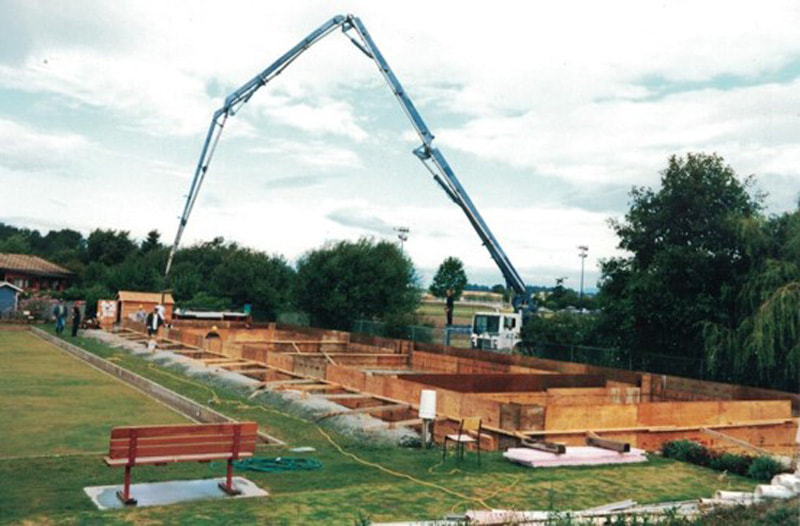 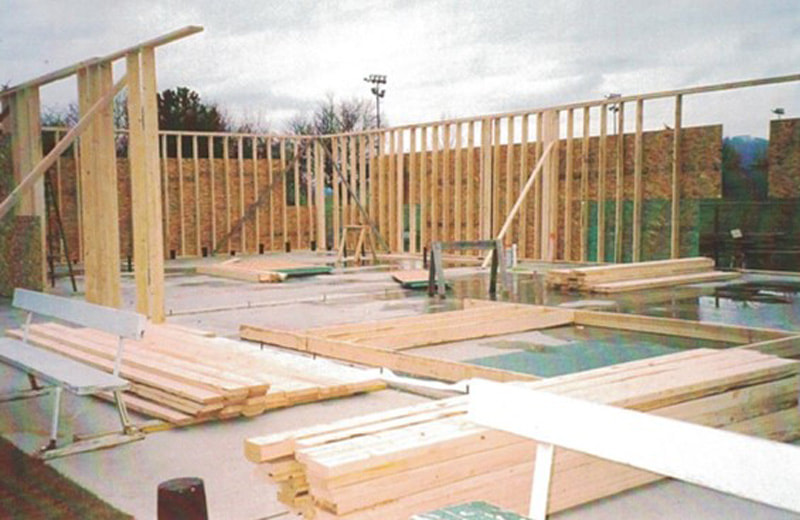 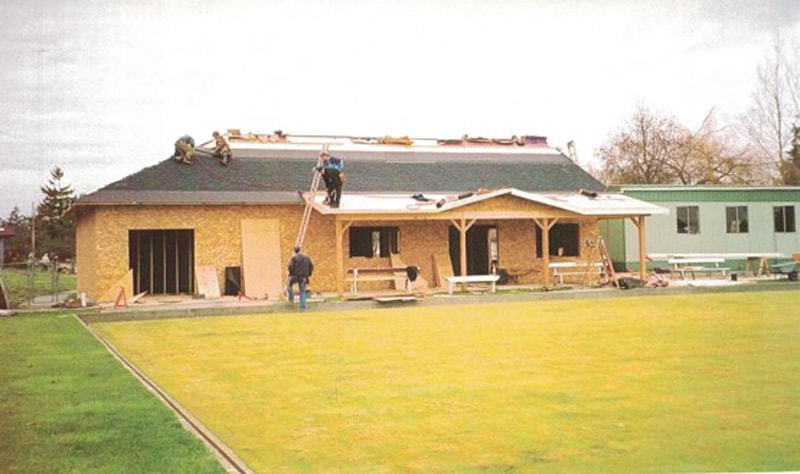 ONCE UPON A TIME, a group of friends from the Central Saanich Bowling Club were chatting over a cup of coffee, possibly discussing the past season's activities. Bemoaning the fact that there was now a two year waiting list to become a member, someone said, "Why not form our own organization?" And so the seed of the idea was sown.


Those four years were action packed. So much to do and the founders proceeded with great enthusiasm, blissfully ignorant of the enormity of the project they were undertaking. Five people formed the nucleus of the proposed club. Andrew & Nancy Williamson, Gerry Cross, Connie Priestley and Victor Sutherland. Victor was designated 'Organizer'.

In February 1994 a letter was sent to known local bowlers inviting those who were interested to attend a pre-inaugural meeting to discuss the formation of a local lawn bowling club. Twenty-nine people attended that first meeting on April 6, 1994 at Iroquois Park Clubhouse. It was unanimously agreed to form a registered society and to seek formal approval of the Sidney Town Council to locate a lawn bowling club at Iroquois Park as had previously, but informally, been discussed between Andrew Williamson and the Mayor. It was also agreed to hold a public awareness meeting to inform the community and encourage membership. This inaugural meeting was to be held at Sanscha Hall on May 11, 1994.

On April 13, 1994 Gerry Cross filed a 'Notice of Address of Society'; under the Society Act. Mr. Cross was also responsible for drawing up the Constitution and Bylaws of the Sidney Lawn Bowling Club.

The initial cost for one green with security fencing was estimated to be $100,000.00.

FUND RAISING now became top priority and support was sought at all government levels, service clubs, trade associations, etc. The response was disappointing to say the least - $3,835.00. Interestingly, one third of the donations came from neighbouring bowling clubs.

With response from local sources being practically nil, it became increasingly clear that the club would have to depend upon the talents, resourcefulness and generosity of its members, and that response was phenomenal.

A special meeting was held in August 1996 to discuss the financial status of the club and ways and means to raise sufficient money to meet the BC 21 criteria for a grant of $27,000.00 (roughly one third of the total cost of construction — best estimate now was $81,000.00). The club had $20,000.00 and a promise of $10,000.00 by the Seniors Lottery, subject to clearance from the BC Games Commission. The club now had to raise $24,000.00 and two means of doing so were discussed - Bonds and Membership. The response was encouraging. An Issue of Bonds was raised at $100.00 each and 50% of the members purchased one or more. And as a result of advertising and personal contacts, the membership soared (albeit briefly) to 170 though not all were potential members since many of them, some 30+, were already affiliated with other clubs. Nevertheless, they wanted to show support for the development of the Sidney Lawn Bowling Club. However, a membership of 130 would sustain one green so they were on the right track.

Fund raising became almost an obsession. The club's first BBQ was held in the rain on Sept. 5, 1996. A good turnout of 60 people came armed with their own utensils, folding chairs and TV trays. Remember, this club had NOTHING, just the use of two dressing rooms in the Iroquois Park Club, so for some time it was BYO whatever. And afterwards, Dorothy Schwartz and her merry maids simply piled all the dishes into a wheelbarrow and trundled them along to the kitchen to wash up. The club netted $78.00 on that occasion and a coffee urn was purchased on the proceeds of a raffle. Two years and four BBQ's later, the net proceeds for #4 was $800.00!

The first garage sale was equally exciting and realized $1,232.00 and the following annual garage and bake sales increased in popularity and revenue.

Potlucks always guaranteed a full house and the first, plus raffle netted $708.00. A popular local entertainer/speaker, Dr. Martin Collis, spoke on Health and Wellness, his theme was "Laughter is the Best Medicine" and the club laughed its way to the bank with $920.00.

Another first time event was tackled with great enthusiasm, a buffet supper followed by silent and live auctions, held in Sanscha Hall and featured paintings by local well known artists, and items donated by members and local businesses. The proceeds of two paintings by Andrew Williamson were donated to the club. $5,500.00 was a grand ending to a gala occasion.

Jack Swift came up with the idea of a 'Square Foot Board' comprising 16,000 squares representing the 16,000 square foot clubhouse planned for the future and members and friends were invited to sign on at $25.00 per Square Foot. Again, the response was gratifying. These are but a few of the many events the busy social and fund raising committees were responsible for.

Fund raising is the backbone of many clubs especially the SLBC because they, for many years, really did have to go it alone. The only mistake they made was Timing. Few, if any, similar clubs have come into being without funding of some kind from local, provincial, and/or federal sources. But at that time, fiscal restraints were very much in effect and banks were not eager to make loans to an organization with no collateral. Then it became a waiting game. Waiting for confirmation of location and promised funding.

The nomadic life of the SLBC continued. For the most part, meetings were held in Public facilities such as school libraries, Sanscha Hall, church halls etc. and the social activities usually at Central Saanich Lawn bowling Club and Iroquois Park Club where they were beginning to feel at home. Trouble lurked however. As public awareness of the proposed use of the Iroquois Park grew, so did the concern among conservationists that trees would have to be removed to accommodate the SLBC and so another location had to be considered. Fortunately it was close at hand — next door in fact — part of the Sewer Treatment Plant property off Lochside Drive — a happy choice as it turned out.

At last it came in May 1997 - between Capital Regional District (licensor) and Town of Sidney (Licensee).... WHEREAS to facilitate the establishment of a Lawn Bowling facility and grant the right to occupy, Licensee will pay Licensor the sum of $10.00 on or before the 1st day of June 1997. A much condensed version of the eight pages of 'Thou shalt and Thou shalt nots'. But this was the message for which all had been waiting.

In June, 1997 the work crew was ready for action, delayed somewhat by the need to construct a temporary access road for heavy equipment. By the end of July the green was in place, seeded with Pancross Creeping Bent and volunteers were called for each day to water (2 hours AM and 2 hours PM) until the end of September.

Thanks to the huge contribution of volunteer help provided by the members in the construction of the green, it was estimated that their labour saved the club $50,000.00.

January 1998 and thoughts of a clubhouse now became the focus of attention. It was estimated at $60,000.00 EXCLUSIVE of labour. Acting on the advice of experts, it was decided to pour the entire concrete slab for future building extension, and it was hoped that work could begin in March. However an unforeseen problem surfaced in the form of soil contamination. At the direction of the inspectors, 240 cubic metres of soil had to be removed to the Hartland Land Fill and replaced with graded quarry stones consolidated in 9" layers. This was followed by the installation of tons of rebar for the reinforcement of the concrete. The extra work plus fees for consulting services, added $38,000.00 approximately to the cost with a further $22,000.00 needed to complete the foundation. Finally, on April 1999 at 7:30 AM 60 cubic metres of concrete was poured. Here again, every step of the labour intensive undertaking was recorded.

For the time being, (for lack of funds) plans for a clubhouse had to be shelved in favour of a temporary structure, and an opportunity arose when a school portable became available and the club's bid of $5,000.00 tax included was accepted. The portable was duly moved to the east of the foundation in the fall of 1999.

In many ways, 1999 marked the coming of age of the SLBC. They were now affiliated with (1) Lawn Bowls Canada; (2) BC Lawn Bowls; (3) South Island Lawn Bowling Association. Each group afforded incentives such as: (1) Tax receipts for donations, (2) Lower insurance rates and score cards, (3) Organizing games in the area and arranging training courses for coaching and umpiring respectively. 1999 was also the first full season on the green and Ron Leslie and June Parsons had prepared an exciting and challenging program of activities, special events, trophy events and just plain fun events. As
a precursor to this, Ron also conducted a series of five coaching sessions in the clubhouse at Iroquois Park for the benefit of newcomers. Coaching and clinics for new and advanced bowlers still continue.

LADIES OPENING DAY was held on Wednesday, April 28, 1999. 36 took part and afterwards, celebrated by going to Salty's for fish and chips.

OFFICIAL OPENING DAY CEREMONIES of the club were held on Saturday May 1st, 1999 attended by the Mayor and other dignitaries. There was a ribbon cutting and flag raising ceremony at 12 noon followed by lunch served in a blue tent pitched in the southeast corner of the rink where a kind neighbour allowed the club to plug in to her electricity and provided water for coffee and tea.

This was also the year of the Big John, a cell phone for emergencies, and the introduction of 'Donut Thursday'.
Winter activities were now introduced thanks to the advent of the temporary clubhouse. Carpet bowling, cribbage, whist, darts and even potluck suppers were on the agenda and enjoyed for two winters.

Meanwhile, members were ever on the alert for bargains and give-aways preparing for the time, in the not too distant future, when they would have to equip and furnish a permanent clubhouse.

When Goodwill folded, a huge carton of kitchenware (cutlery, dishes etc.) was bought. 200 used lockers from Oak Bay Bowling Club were donated dismantled, transported and stored for safekeeping. Kitchen cabinets (used) advertised in a local paper were acquired and stored. Tables and chairs were bought for a song when the Masonic Hall closed down. Indoor bowling carpet and stand was acquired for $100.00 when a recreational hall was dismantled.

All the time the tried and trusted fund raising events continued. Sometimes it must have seemed like the club was taking one step forward and two steps back. Then one magical day, two staunch supporters stepped forward with a $50,000.00 loan and suddenly the goal was very much in sight.

By February 2001 the new clubhouse was virtually complete. Volunteers had done the interior painting and thanks to donations from two members, flooring of all rooms except the main hall was completed. Some members worked all winter measuring, making and adapting the cabinets and counters for installation in the new location. Still to be completed were bathroom vanities, enclosures and ceilings, and main hall flooring.

Bit by bit the whole picture came together. A microwave, stove, refrigerator, kettles and dishwasher were all donated to create a very functional kitchen — the hub of all activities. By the end of the bowling season, a full program for winter activities was in place. And so, for the purposes of this record, Phase 1 of the Sidney Lawn Bowling Club can be said to be achieved; but it's a safe bet that Phase 2 is simmering on the back burner!

Certainly there is unfinished business to be taken care of, not the least of which is the acknowledgment of the tremendous effort all members of this club contributed. Initially the burden fell on those foot soldiers, the founders, then as the need arose, the fund raisers, social activities committees, construction gangs, scroungers, carpenters, painters, gardeners etc. all rose to the occasion — still do, and no doubt will continue to do.